Asbestos health and safety information from the HSE … 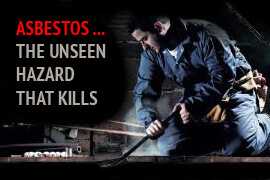 When materials that contain asbestos are disturbed or damaged, fibres are released into the air. When these fibres are inhaled they can cause serious diseases. These diseases will not affect you immediately; they often take a long time to develop, but once diagnosed, it is often too late to do anything. This is why it is important that you protect yourself now.

Asbestos can cause the following fatal and serious diseases:

Mesothelioma
Mesothelioma is a cancer which affects the lining of the lungs (pleura) and the lining surrounding the lower digestive tract (peritoneum). It is almost exclusively related to asbestos exposure and by the time it is diagnosed, it is almost always fatal.

Asbestosis
Asbestosis is a serious scarring condition of the lung that normally occurs after heavy exposure to asbestos over many years. This condition can cause progressive shortness of breath, and in severe cases can be fatal.

Pleural thickening
Pleural thickening is generally a problem that happens after heavy asbestos exposure. The lining of the lung (pleura) thickens and swells. If this gets worse, the lung itself can be squeezed, and can cause shortness of breath and discomfort in the chest.

Note: It is also important to remember that people who smoke, and are also exposed to asbestos fibres, are at a much greater risk of developing lung cancer.

What are mental health problems?

Mental health problems are usually defined and classified to enable professionals to refer people for appropriate care and treatment. But some diagnoses are controversial and there is much concern in the mental health field that people are too often treated according to or described by their label. This can have a profound effect on their quality of life. Nevertheless, diagnoses remain the most usual way of dividing and classifying symptoms into groups.

Most mental health symptoms have traditionally been divided into groups called either ‘neurotic’ or ‘psychotic’ symptoms. ‘Neurotic’ covers those symptoms which can be regarded as severe forms of ‘normal’ emotional experiences such as depression, anxiety or panic. Conditions formerly referred to as ‘neuroses’ are now more frequently called ‘common mental health problems.’

Less common are ‘psychotic’ symptoms, which interfere with a person’s perception of reality, and may include hallucinations such as seeing, hearing, smelling or feeling things that no one else can. Mental health problems affect the way you think, feel and behave. They are problems that can be diagnosed by a doctor, not personal weaknesses.

As found by the APMS (2014), 1 in 6 people in the past week experienced a common mental health problem.

Anxiety and depression are the most common problems, with around 1 in 10 people affected at any one time.

Anxiety and depression can be severe and long-lasting and have a big impact on people’s ability to get on with life.

Between one and two in every 100 people experience a severe mental illness, such as bi-polar disorder or schizophrenia, and have periods when they lose touch with reality. People affected may hear voices, see things no one else sees, hold unusual or irrational beliefs, feel unrealistically powerful, or read particular meanings into everyday events.

Although certain symptoms are common in specific mental health problems, no two people behave in exactly the same way when they are unwell.

Many people who live with a mental health problem or are developing one try to keep their feelings hidden because they are afraid of other people’s reactions. And many people feel troubled without having a diagnosed, or diagnosable, mental health problem – although that doesn’t mean they aren’t struggling to cope with daily life.

The word ‘depression’ is used in many different ways. Everyone can feel sad or down from time to time, but most people manage to cope and can recover without professional help. However, everyday ‘blues’ or sadness is not depression.

Although there are several different types of depression, there are a number of common symptoms. It is important to know that not every person who has depression will have all of these symptoms or the same severity of symptoms.

In addition, the person can have other symptoms, such as:

There are many different factors which can contribute to the risk of someone becoming depressed, and the more factors that are present the greater the risk of depression. For example:

The more risk factors a person has, the greater their vulnerability to depression. However, it is important to remember that sometimes, depression just happens and there may be no obvious reason.

If you are concerned about depression speak to your GP or other health professional.